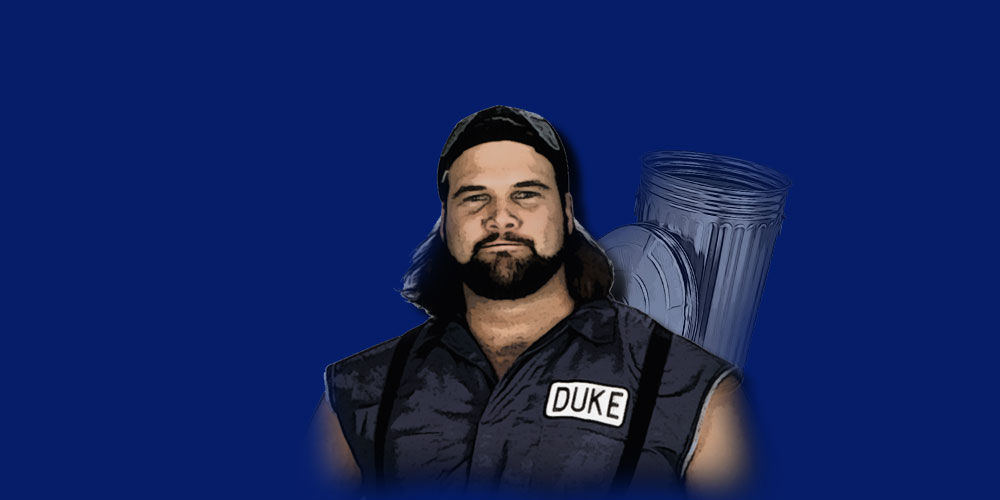 He grew up in Lodi, California, and started his wrestling career in 1990 on the Independent Circuit.  His big break came when the WWF brought him on the roster in 1994.

While his WWF career never really took off to star status he did have a great fanbase in Germany anytime he wrestled there.

Gimmick:  Duke’s main gimmick was the Garbage man.  He would carry a metal garbage can to every match and more often than not used it on his opponents by smashing it over their heads.

Career Summary:  Duke Droese was, unfortunately, part of the wrestler’s with other jobs gimmick that the WWF would often utilize in the 90’s.  The gimmick really didn’t do much for his career as it never really went over with the crowd and was kind of silly overall.

That being said he did as much as he could with the role and made it work here and there.  The crowd always got satisfaction when someone got smacked on the head with one of his garbage can lids.  He had the size and worked well on the microphone but injuries took their toll on Droese and he eventually worked out a contract release from the WWF with Vince McMahon.

Duke for the most part wore a classic blue garbage man’s outfit for most of his WWF career.  It had black suspenders and a white name patch with Duke written across.  From time to time he also wore a beige shirt overtop with the sleeves cut off.

For a brief time, they experimented with a green look.  This included green pants, a white tank top with Duke written across the chest, and a black beanie on his head.

Of course, his main accessory was always a metal garbage can which he brought to ringside every match.