Wrestling Tag Teams Of The 80s 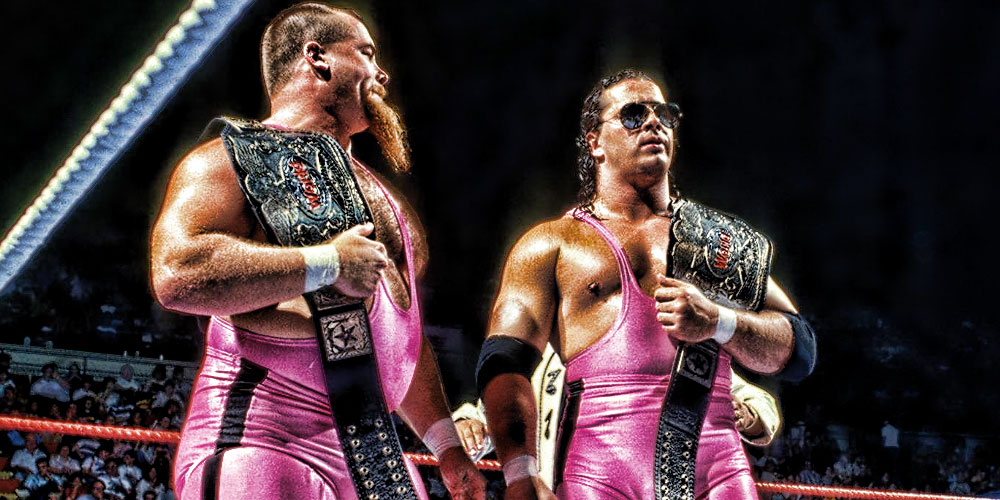 The eighties were considered the “golden era” in professional wrestling where many of the most iconic names like Hulk Hogan and Andre the Giant were born. What goes overlooked is how many amazing WWE Tag Teams existed in that decade that till this day still hold up as some of the best characters and gimmicks ever created. In no particular order here is the list of WWE Tag Teams from the 1980’s that helped shape the WWE or back in those days WWF landscape.

The British Bulldogs were a tag team made up of wrestlers David Smith (Davey Boy) and Tom Billington (Dynamite Kid). They were real-life cousins who were both born in Wigan, England. The tag team was hugely popular in the ’80s and had a longtime rivalry with the Hart Foundation.

The Hart Foundation was undoubtedly one of WWE’s greatest tag teams of all time. Composed of Bret Hart and Jim Neidhart they were the ultimate heels back in the eighties and had great rivalries with the British Bulldogs and the Killer Bees. You couldn’t miss them with their hot pink attire and their finisher move is maybe the most iconic tag team finisher ever with the patented Bret Hart running clothesline while The Anvil held the opponent in the air.

When you heard this line, “Here comes the Ax and here comes the Smasher”, you knew one of the most intimidating tag teams ever were on their way to the ring. That line comes from the Demolition’s famous theme song which was composed by Rick Derringer. They hold the record for the single longest reign with the Tag Team titles at 478 days. Ax and Smash were a force in the WWE with spiked metal ring attire and some of the best face paint back in those days. Their finisher move looked so devastating for that era as Ax would drop an elbow from the second rope as Smash held the opponent over his knee.

The Killer Bees were kind of a bland tag team with one small gimmick that upped the ante. They would pull out matching bee striped masks during the match, which they called “Masked Confusion.” The key to the masks was once they put them on you couldn’t tell which member was which and they could easily switch in and out between the two of them. They never won a Tag Team title although they were likely deserving as they had a long 4 year run in the WWE and went over quite well with the fans.

If you are looking for the ultimate “gimmick” tag team of the eighties, The Bushwhackers may be it. They portrayed backcountry simpletons who liked to lick each other, yep you read that correctly. They were total babyfaces and some of the fans got a kick out of them. The funny thing is Jonathon Boyd (Butch) and Rip Morgan (Luke) had a long, successful wrestling career before the Bushwhackers and were a violent, hardcore team. Ultimately, their WWE gimmick was awful and they will never be thought of as a memorable tag team of the ’80s.

The famous “Frenchmen” of the eighties the Fabulous Rougeaus had a long run in the WWE from 1985 to 1990. They may have flown under the radar for most fans but they were a very talented duo who performed many high-flying acts. They were at their best in the heel role where they would taunt the American fans by waving tiny American flags and trying to start “U S A” chants.

Even if you were not a big wrestling fan back in the 80’s you almost certainly have seen the Iron Sheik at some point, one of WWE’s most iconic characters. When Vince McMahon paired him up with Nikolai Volkoff he created perhaps the most hated tag team in WWE history. The pro-American crowd back in the eighties despised the Iranian, Russian combo which made them the perfect heels. I loved this tag team known as the “Foreign Legion” and even though they weren’t the most talented in the ring their persona’s more than made up for it outside of the ring.

The Dream Team was a classic 80’s heel tag team in the WWE. Greg Valentine played the role perfectly and this may have been Brutus Beefcake’s best role in the WWE. They had some great matches with the Killer Bees and British Bulldogs over the years and a long title reign that lasted 226 days back in 1985.

No not the NHL hockey team, back in 1986 The Islanders debuted in the WWE as babyfaces. Besides their standout floral pattern tights, The Islanders never really had a big impact during their run. They got lost in an era where the WWE was full of great tag teams. Bobby Heenan joined them eventually and they did a heel turn which was the highlight of their time together.

Only diehard wrestling fans will remember the cult classic team Los Conquistadores. Played by Jose Estrada & Jose Luis Rivera they may have been the originators of the spandex bodysuits. The outfits were everything for this duo as they really didn’t have any success in the WWE as they played the role of the constant “jobbers”. More recently in the 200’s, tag teams like Edge and Christian brought back the Conquistadors outfits to provide some comedy and nostalgia for the fans.

Two iconic wrestlers joined forces for a brief period of time back in 1988 to form The Mega Bucks. Andre and DiBiase were created after a long-running story between Ted DiBiase and Hulk Hogan. Eventually, Macho Man Randy Savage would get involved and the ultimate Tag Team Match was set between the Mega Bucks and the Mega Powers (Hulk Hogan and Macho Man). I think the most memorable thing to come out of the Mega Bucks was their appearance in the now cult 1989 arcade game WWF Superstars.

The Powers of Pain debuted in the WWF in 1988 and you could clearly tell their look was inspired by the Road Warriors. The team consisted of two huge monsters in the Barbarian and Warlord and were eventually managed by Mr. Fuji. They were a powerhouse team that got a decent run but never achieved great success.

A rather forgettable tag team of the eighties that never really took off. Paul Roma was the stand out of two muscle men as Jim Powers lacked the charisma to be a star. They had a couple of titles shots vs the Hart Foundation but lost every match.

Most consider The Road Warriors one of the best tag teams of all time. The Road Warriors had it all for their time – Face Paint, Outfits, Intimidation, Theme – they were the main draw for the NWA organization for many years. Unfortunately they never quite had the same impact when they made their way to the WWE in 90’s but their impact will never be forgotten among die-hard wrestling fans.

For a brief period of time, the WWF universe was turned upside down when the two biggest stars at the time joined forces to create The Mega Powers. Hogan and Savage will always be remembered as one of the very first Super Teams and they created one of the best storylines of all time. Ultimately, Savage would turn on Hogan of course out of jealousy because of the lovely Miss Elizabeth.

The team of Tito Santana and Rick Martel was your classic babyface tag team of the 80’s. They had some outstanding in-ring ability and were talented performers. They had one long title run but ultimately Strike Force was a nice launching pad for both their single careers after the team broke up.

The Bolsheviks are one of the least remembered tag teams of the eighties and for good reason. They were rather boring and just trying to copy the success of Volkov’s former tag team with the Iron Sheik.

They were more of a comedy duo who are most remembered for singing the Russian national anthem before each match.

The Rockers was the tag team that helped launch Shawn Michael’s singles career creating one of the WWE’s greatest icons of all time.

The tag team themselves had a good run in the late eighties and were a fan favorite for many years. They will forever be remembered more for how they broke up, however. Shawn Michaels throwing Marty Jannetty through Beefcake’s barbershop window is one of the more legendary moments in wrestling history.

Arn Anderson and Tully Blanchard basically carved the blueprint for what a heel tag team looks like. They could do it all back in the eighties from mic work to getting heat and cheating every inch of the way.

Looks-wise they embody the 80’s. The dad bod vibes with all too tiny trunks. They are most known for their work in the WCW but had a run in the WWF that started in the late eighties. Most diehard wrestling fans will have the Brain Busters in their top ten.

If you don’t remember this tag team, don’t worry you are not alone. The American Express featuring Mike Rotundo and Danny Spivey was a failed attempt at re-making the successful tag team known as the U.S. Express.

They had a chance to compete early on as they were put in house matches vs the Dream Team who were the current Tag Team Champions at the time. The crowd never took to them and they eventually fizzled out after 2 years.

The Colossal Connection was a very brief tag team partnership between Andre The Giant and Haku. It was mainly created as an attempt to extend the career of Andre as his health was quickly diminishing at this point in 1989. Both wrestlers were a part of the Heenan Family Stable and thus the pairing together. They did manage to hold the Tag Team Titles for 1 month before ultimately losing to Demolition at Wrestlemania VI.

The Twin Towers were just that, two massive-sized men paired together with a combined weight of over 700 pounds. The most well-known of the two was The Big Boss Man who had a long successful singles career. Akeem was a gimmick character who never went over and thus their pairing together was rather forgettable. They never won any titles and only lasted one year together but they did have some funny on-mic moments at the time.

You may not remember these two ladies who hailed from Japan but they were the high flyers of the ladies division back in the eighties. They were fearless in the ring and two of the most talented women wrestlers of all time. They had a long title reign lasting 136 days back in 1988 and are inducted into the Wrestling Hall of Fame.

In 1988, the WWF decided to pair two of the eighties most hated villains into a power tag team named Rhythm and Blues. Honkey Tonk’s character stayed the same but Greg “The Hammer” Valentine drastically changed his image, most notably his blonde locks became jet black.

Ultimately, the duo was just thrown together and didn’t really work. Honkey Tonk was his entertaining self but this gimmick for Valentine just didn’t fit. He was always a way better heel on his own.