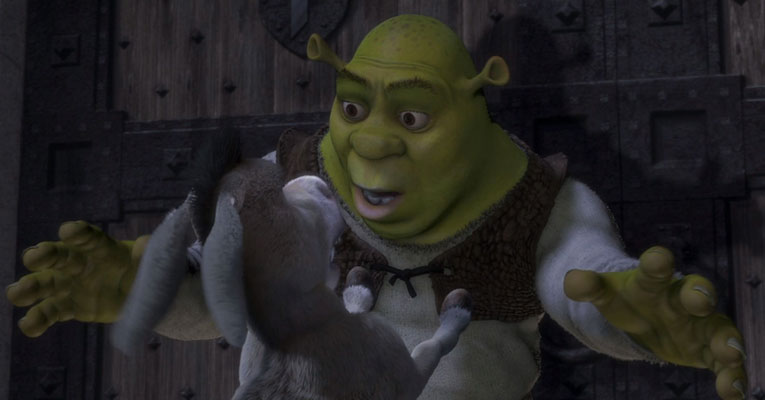 Shrek is a Dreamworks creation that debuted on the big screen in 2001, and audiences were introduced to one of the greatest animated movies of all time. They have since gone on to make 3 other sequels to the original but none of them capture the imagination and humor of the first.

Shrek was groundbreaking with eye-popping CGI and a story that appealed to both young and old. It was one of the first “adult” themed CGI stories with characters who came with a witty sense of humor. The voice actors were incredible including stars Mike Myers, Eddie Murphy, Cameron Diaz, and John Lithgow. What made Shrek so great was its wide array of quirky characters and you could argue some of the smaller role characters really stole the show. We painstakingly went over the entire movie for our list and picked out every single character to make a memorable appearance.

Here are all the characters in the movie Shrek in order of appearance.

Shrek is the main hero and star of the movie. He is a big green ogre who lives in the swamp lands.

Look, I’m not the one with the problem, okay? It’s the world that seems to have a problem with ME!

The angry village mob is on the hunt for Shrek at the beginning of the movie. They bite off more than they can chew when they encounter him.

The wicked witch is one of the fairytale characters being sold to the King’s soldiers.

That’s 20 pieces of silver for the witch

The three bears are already locked in cages when we first see them. Mama and Papa bear are in one cage while the poor little baby bear is alone in a smaller cage.

This cage is too small!

The King’s soldiers are kidnapping all the fairytale characters in exchange for silver as per Lord Farquaad’s orders.

Five shillings for the possessed toy. Take it away.

The classic fairytale characters Pinnochio and Geppetto make an appearance early on. Geppetto is trying to sell Pinnochio despite his pleas that he is a real boy.

The old woman is the original owner of Donkey. She claims he is a talking donkey.

Donkey is the co-star of the movie who befriends Shrek despite his dislike for the Donkey. The two embark on a journey together to save Princess Fiona.

We can stay up late, swapping manly stories, and in the morning, I’m making waffles!

The Disney star Peter Pan appears as a little boy in the early stages of Shrek. He appears to be trying to sell Tinkerbell at the time.

All three little pigs from the classic fable are also in the fairytale line. They are very humorous characters in their brief appearances throughout the movie.

He huffed, and he puffed… and he signed an eviction notice.

The three blind mice are the first fairy tale characters to show up at Shrek’s swap causing havoc.

What a lovely bed.

Snow white is encased in a glass chamber and is brought to Shrek by the seven dwarfs.

Sleeping Beauty is encased in a glass chamber and is brought to Shrek by the seven dwarfs. She is, of course, sleeping.

The bed is already taken.

The wolf from Little Red Riding Hood is making himself at home in Shrek’s bed when he makes his first appearance in the Dreamworks movie.

The Pied Piper is doing what he does best, playing his pipe for all the mice in the swap.

Three Fairy Godmothers make a brief appearance when Shrek confronts all the fairytale characters who have overtaken his swap.

A beautiful, mythical unicorn has made his way to Shrek’s swamp.

The powerful Lord Farquaad makes his appearance 16:00 min into the movie. He is the main antagonist and is brilliantly played by John Lithgow.

I’ve tried to be fair to you creatures, but now my patience has reached its end!

The scene-stealer of the whole movie is the Gingerbread man who is horribly tortured by Lord Farquaad. His one-liners are great throughout the movie.

NO! Not the buttons! Not my gumdrop buttons!

The magic mirror is Lord Farquaad’s go-to man for advice. He introduces him to Princess Fiona.

It’s time for you to meet today’s eligible bacherlottes.

This big-head Lord Farquaad mascot is terrified of Shrek.

This woman wrestling enthusiast is enjoying Shrek laying the smackdown on his opponents in the Tournament of Champions scene.

Give him the chair, the chair!

The castle guardian who is terrifying on the outside but an actual sweetheart on the inside. She falls in love with Donkey.

The beautiful Princess who is trapped inside the castle and in need of rescue. She ends up being the love interest of both Lord Farquaad and Shrek.

But I’m supposed to be rescued by my true love, not by some ogre a-a-and his PET!

The Merry Men are Monsieur Hood’s sidekicks who give a great rendition of Riverdance.

Near the end of the movie, it is discovered that Princess Fiona is herself an ogre just like Shrek.

It’s a spell! When I was a little girl, a witch cast a spell on me. Every night I become this, this horrible ugly beast!

The Bishop has the task of marrying Lord Farquaad to Princess Fiona.

We are gather here today to bear witness of the union of our new king.